WorkChoices – Are the majority really disadvantaged? 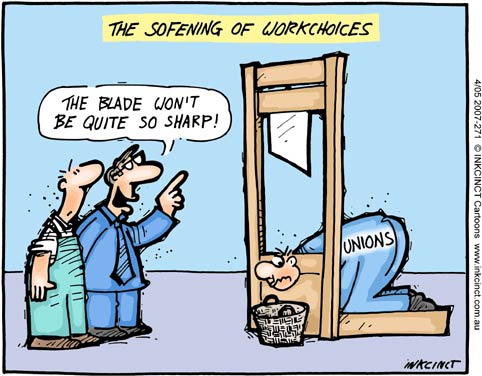 Looking further into WorkChoices (and following a Whirlpool thread on the subject), it seems that in Victoria, a study conducted has exposed WorkChoices as a reason for lower pay and more hours.

I can’t speak certainly on the nature of the statistics exposed in this PDF document, as I was too busy watching Melbourne kick Manly’s arse to the tune of 38 – 8, but, I can tell you that the conclusion of the document does state that WorkChoices can be pointed as being responsible for the lower wages and higher hours to do the same job.

Clearly it points out that WorkChoices gives the unskilled (I’d guess about 30% + of Australia’s workforce) a disadvantage for being not skilled.

I still stand with my view however, they’ve had a decade to get skilled, they did nothing, their own fault, however, I don’t think WorkChoices is a solution, if as the topics have revealed that it could send us the way of india and the like and have a low wage workforce.

The PDF report spoken of earlier, done by professors at a Victorian area, http://www.business.vic.gov.au/busvicwr/_assets/main/lib60013/awa-ca-earnings-paper.pdf
Shows in the conclusion:
“Overall, the dominant pattern with AWAs is that they are typically associated with poorer average earnings than registered collective agreements.”

But, in the “About the researchers” topic, we see:
“He previously worked for ten years in the then Commonwealth Department of Industrial Relations, over five years of which was spent in the Senior Executive Service of that Department, including head of the Wages Policy Branch, with responsibility for the Equal Pay Unit, the Labour Research and Economics Branch and the Research and Policy Development Branch.”

So, I question as to whether that was done on Labor’s time or Liberal time.

The report still cannot be ignored however, as the statistics taken, if taken from a reasonable segment of the workforce suggest AWA’s disadvantage employees.

Now, I’m not sure on the complete effect on the economy. It starts to look by that report at least, that this is another Howard Government stuff up, just like the Telstra sale was.

I don’t want to see our country be lowered to the ways of some other countries were employees fight for low dollar wages. It’s not worth it.

I’m still keen on seeing more evidence to influence my decision here, because unlike MP’s, I like to review all the information available on a particular matter before making my ultimate decision on it. Which is fair, considering with time, there’s nothing actually lost as opposed to making “blind decisions”.

I know a few things are good decisions by our current government, simply because the alternative is worse. This includes the OPEL agreement, which assures underserved areas better communications services and competition.

What I remain unsure about is: AWA’s are they good for the australian workforce, or do they lower wages and make employees work harder for the same dollar?

Awards cost a bit to administer, but if Aussies will be working harder for less bucks on an AWA, then well, the obvious is clearer, keep the current taxes flowing to fund award maintenance, because AWA’s make employees worse off.

.. Which means the Howard Government wasted $200 million dollars.. Not the first waste of money.

I’m still not convinced Labor is the answer either.

You can only spend so much money before you need to push taxes up.