WorkChoices – Is anyone really disadvantaged, or is it really just good for all ?

I’m curious with the IR laws being such a big election issue as to whether there is any evidence from anyone, a real case study, where the employee was an honest, hard working employee (and not a slacker taking 5 sick days a week) which was disadvantaged to a measurable scale as a result of being placed onto an Australian Workplace agreement? 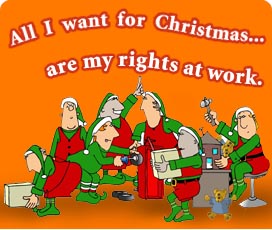 Thinking about this subject the logic all makes sense:

Those that are unskilled and didn’t bother to use the last decade they had to get some skills are obviously going to be placed on AWA’s with minimum conditions that the fairness test will accept.

Since they currently work, accepting minimum wage as the norm, then the changes by being under an AWA should generally be no different to minimum award rates.

Those that are skilled, or valued in what they do, the employer is likely to not want to make this a headache for the employee and instead just simply try and create a favourable agreement, at or better than current conditions to basically get the employee on side, so they don’t up and leave as a result of the agreement.

The media has been filled with crap lately, and I’m not trying to lean towards anyside of it.

The workplace ombudsman makes sense to administer the fairness test, when you consider the amount of dollars spent administering all those seperate awards, and industrial relations action is getting rare (not rare completely, but rare), it’s suggestive that the Awards were satisfied and don’t require much in the way of administration.

So, to fix the high costs associated with awards, placing in AWA’s makes sense, afterall, it’s not a taxpayer affair that someone “got a job”. It’s an employer, employee affair. Something that as service provider, and service seeker, can surely be negotiated between them both on fair terms.

I don’t see Employer’s as being the mean people in the equation here. They’ve got a business to grow, they want you on their team cause there’s no one else around to fill that position with unemployment levels low (considering that there is 100,000 unfilled jobs in Australia) they really are going to want to hang on to you rather than waste, time, money, productivity on making you redundant, funding the finding of someone else to replace you (can take months, even years), and then train that new person to be as proficient as you.

It’s all a big headache.

Which is why many don’t bother to audit sick days too often as its not worth the time, unless an employee is taking a lot of sick days!

Finding employees isn’t simple. It’s not a simple call and position filled, there’s very much more to it.

They have to locate a job placement agency as well as pay for advertising, because you don’t know what rubbish the dole will send you and you might find better people who are LOOKING for that job, and not being forced to it.

Then you have to interview. The number of candidates, some running late, time spent interviewing. There goes 2 days of one or more staff member time, depending on the position.

Then after you’ve interviewed, you have to review the notes, generate a short list.

From that short list, you have to determine if you want to speak to any again or if theres a clear leader. So you either have another day gone in just interviewing a few of the same people in more depth.

After that, they have the job.

All that time, the job you had is not being done, or being done half assed by another staff member who is going to be doing half his / her own job at the same time, thereby halving productivity.

So, the new employee starts Monday. Shows up ready for work. Then you have to train them how you do things in the company, get them familiar with all procedures and policies and make sure they know where everything goes, how to get paid, etc. There goes a day at minimum, a week in training them is possible.

Add on to this that they are still learning, bound to make mistakes, and won’t be as proficient or speedy as the employee that didn’t go ahead on the AWA due to a pay or hours descrepancy.

It all of a sudden becomes VERY cheap to simply fix the descrepancy and eat it. Unless of course a new employee could be found, settled and proficient in 3 – 5 days, the majority of jobs will likely be secured by AWAs anyway!

I’m keen to see real life case studies from anyone screwed by an AWA. Considering its a key voting decision many are likely to use (it must explain the ALP lead), I’m wanting to see why I shouldn’t just vote based on budget history (Liberal leads) and maintaining the current situation which isn’t toooooo bad.

– Still beats putting Rudd in to favour Telstra’s scam, which is my real motivation for not voting ALP. Doesn’t seem like a strong one does it? Well.. That gives you some idea of what I think shouldn’t happen with FTTN.

Naturally its not the strongest of reasons to influence voting, but in the absense of any other pressing issues, that’s all I really have.

I admit I have reviewed the Kevin07 site recently, and he does have a fair bit of impressive stuff.

But, I wouldn’t want to support Conroy, as Coonan, although FAR from perfect, is still miles ahead of Conroy in the staying informed department.

Hmm.. Perhaps I should vote for someone else altogether. Both of the choices aren’t that appealing, it’s just maintaining the current situation won’t exactly see Telstra given the rights to continue being consumers over, and it won’t see a raid of the future fund (a good idea, it lowers taxes long term).

I’m still undecided, but of course WorkChoices is still a key point in my voting decision, I’m just looking for hard evidence that WorkChoices have affected people negatively, and those negative actions have come solely from hard arse employers, and not as a result of employee misconduct, slacking or bludging.

You know, a factual story, and not a media beat up that WorkChoices actually screwed someone over.

That is what would likely change my decision!