Our driveway is a place for our car to be parked. Not so.

The car below, is a clear example of the same idiot who has no idea of how to park. The first failure is to park within 50cm of the kerb – he may as well as park out in the traffic.

Our driveway, with the same car from previous weeks and months blocking approach. 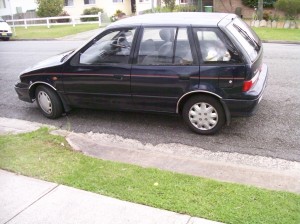 As you can see, greater than 50% of the car is completely blocking our driveway.

Then, earlier, there’s a 90kM/hr stretch of road near us, and I was cruising down that road, and there was a C4WD – C, cause it’s never touched dirt, who was tailgating me at 90. So I slam on the brakes to simulate what would happen if there was a fuckhead up ahead – it is NSW, fuckheads are aplenty – and he starts getting pissed off that I slam the brakes on to demonstrate he was following too closely.

He then comes across a roundabout, and doesn’t indicate to turn right, either.

NSW has to have some of the stupidest people on the roads.

That said, the reason why our speeds on our roads are lower than those of other nations? The drivers on our roads wouldn’t stand a chance if they were faced with conditions such as Germany’s AutoBahn, or other high speed circuits. The speed limits are for many of the users own good, because they clearly can’t look after their own self and maintain a safe following distance, indicate intended direction of travel – or even park a car.

They are stupid. Yet, they are in control of a > 500KG machine capable of inflicting serious injury in their own incapable hands. I sort of think of arranging it to be towed away, just to make an example, but the person who drives it is an old fart, who probably is demented, and we’d just be making an episode of “Dude, where’s my carÂ – Old Fart Edition”.