Back in December, I wrote:

Our key obstacle will be getting the hot water to the granny flat. New piping will be needed, and Iâ€™m sure itâ€™ll have to be insulated in some way, so that we can remove the one that is out there.

.. then I think the house will have had enough of a punishment until we eventually paint it.

How wrong is that!

We got thinking all the way over that time, and now the internals will be redone, I’m just not sure when.

Recladding is key, we need that done for the solar power and solar hot water.
Windows replaced is to insulate the house more – too much air escapes through these older windows, and that’ll be a problem when we later add a reverse cycle air con.
The back deck will be useful, the new internal layout (an after thought), will work well with the back area – it could double as a second living area.

The new floor plan, which went through so many edits, and a contact of mine go over it and make many changes, and we eventually emerged with a plan we thought suitable.

I’ll go through the different revisions, the first of which is below: 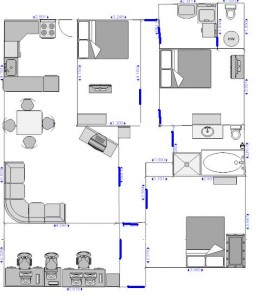 This layout was wrong, it had a hallway added past the new 3rd bedroom, and the kitchen was squashed into the corner room, it was OK, but not the best – it took time to determine it just wasn’t the best layout.

So, onward the changes went, chopping and changing, as if walls were able to be erased with a click of a mouse, and kitchens could be pulled from the very floor boards (thank you Google SketchUp!).. we revised, to this layout: 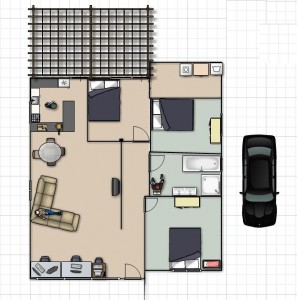 It likewise, sucked – the TV was just in a crazy position, the open space seemed too open to be workable.

This new one eventually emerged after many days, and was the beginning of what will become the ‘current’ final edit: 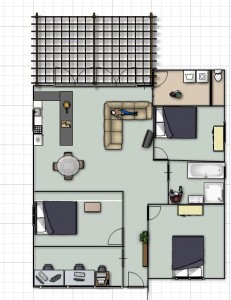 The open area was suitable, the layout matched roughly the idea that was being targetted, but it wasn’t quiet there..

From that, the advice received from my architect contact was immediately edited in, and we conclude with:

This new idea finds the best of each, and seems to be the best we can probably pull off. In it’s current ‘theoretical’ state, it’s hard to tell if we’ll run into issues, the builder who quoted the exterior indicated anything is possible, and I used to live by that very logic, until I came across some impossible end users (the technicalities might be possible) – so now, I’ll remain a little cautious and wait for the ‘oh, you can’t do that, else building code X, Y and Z will be invalidated’ or ‘the structure simply cannot do that’ and so forth.

I get the sense it can be done, but also consider that the plan could be open to changes.

One idea that remains in the back of mind is to add a garage with internal access, and launch highset from there, but I think the intricate detail required to make such a change work will outweigh all possible benefits.

It was my partners plan to extend, rather than modify, I’m glad we eventually considered modifying, because the new plan, should it work out, will provide the best possible use of the space available to this 1960’s building.

We’ll run the current and planned layouts past the valuer, along with the exterior changes, and if we get a positive result, the situation then becomes a little more of a no-brainer.

I still have the desire to eventually build from scratch, I’d love to have a high set house – I’m always surprised by the different ways to use that under house space in those older two-story houses. I’ve seen garages (the most common), extra bedrooms, and offices, and in one case, a BBQ area and a bar.

This entry was posted in House, Random. Bookmark the permalink.