I had a look over the garden / backyard farm this afternoon to see how all was after the large amount of rain we’ve had and to see if there was anything wrong.

I looked over the Granny Smith apple tree, trying to find if any of the flowers had started to turn into fruit, I look over them from time to time to see if they’ve got any issues – and typically just from the one side, this afternoon my partner had a look at it from the other side, and we’ve found something…

Two apples had been hiding behind the leaves at the top of the tree that I didn’t think there was anything behind.. 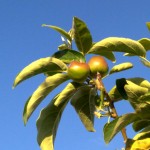 I was well aware of the Lemon tree making progress – it’s got some fruit forming that’s a few months old and should be ready to harvest after the season is up. 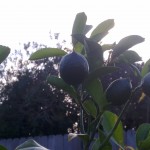 The tree is still small, but it’s certainly larger than it started – this tree was the smallest of them all at the nursery, and had just two leaves and a very thin trunk at the start. It’s grown.

We’ve tried growing a heirloom variety of tomato this year, it’s called Black Russian, and is slightly unusual in that the fruit is a very dark colour. The plant is only about 5 weeks or so now and has put on strong growth with lots of fruit. I should add that there is a cucumber plant that’s very fast growing strangling it – it’ll be a competition – the strongest plant would win. 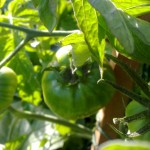 I don’t think there is a garden on this planet that hasn’t had issues with damned snails eating up young seedlings before they’ve had a chance to get big enough to support such an attack. So, we’ve just this week put in some snail traps to catch them – the trick with the trap is to have yeast and salt in combination. They like sugar and yeast type scents (the very same logic applies to alcohol, but sorry snails, you just aren’t worth that much..), so a bit of yeast, a bit of salt – done.

However, we weren’t planning on catching one of these…. 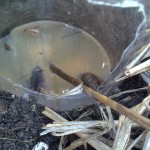 Yes, it’s a cockroach in the snail trap – I wonder if that could be adapted for indoor use ?

The strawberry patch has been growing for some time, it started off with just a few seedlings, but spread itself out and took over the garden bed. The kids like strawberries, so the best solution – let them grow (the kids too). Not a lot of fruit though, damned snails get to them. 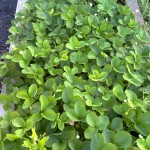 The chickens came along last year, they’ve been laying lots of eggs. We’ve had them escape before too. They aren’t too bad though, not noisy, and not a lot of maintenance too them. 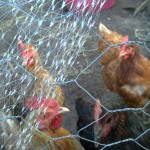 Which one is for dinner? – They sit there thinking they were going to get some scraps – instead they got a photo. Â As can be seen in the background, nothing is as good at getting rid of grass as a chicken. They’ll tear the ground up, get rid of the grass, crap all over it and scratch it over again – stopping any chance of the grass growing back …

Until you move them. 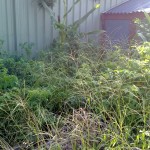 The corn and tomatoes are in there, they’ve grown over the tree stump. The chickens helpfully destroyed all grass, ate corn from their feed, ate cherry tomatoes from last years massive harvest, crapped them out, dug it over again, and that is the result after we moved them so that we could start on removing the tree stump – yes, progress has been slow.

The rain water tank is full, I was worried it’d be too dry over summer making it useless. Apparently not. 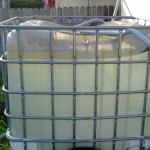 There is a nursery that we’ve started on in the backyard, however the mesh hasn’t been sewed together, and so the rest of it is unfinished. 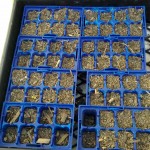 Those are a few weeks old now, nothing. Nada. Zilch. The soil isn’t much either.

There are some Zucchini plants and Cucumber plants that are productive.

The Banana plants have some extras spawning off the side that we’ll need to transplant so that they become the replacements.

This entry was posted in Garden, Random. Bookmark the permalink.